Fighting Parkinson’s, and Pratima has passed away

Today would have been the four year anniversary of Pratima being symptom free from Stage 4 Advanced Parkinson’s. However, it is with sadness and a heavy heart that I share with all of you that Pratima has passed away.

Pratima recently became ill with breathing issues and an infection. She was under doctor’s care, and finally, her heart gave out. She was my Indian mom and she gave me my Indian family. To my Indian dad, and my Indian siblings, Bhavna, Dipti, Gopi, and Bhavesh, I send you love and hugs during this difficult time.

And Pratima, my Indian mom, I give you this tribute to honor your life.

When Bhavna first contacted me, it was simply this: On August 12, 2011, I received a brief email, “dear howard, my mom has parkinson stage 4. after reading your personal experience i am trying to help her out and i feel i am succeeding. thank you so much. bhavna india.” I contacted Bhavna, and shortly thereafter began coaching Bhavna in how to assist Pratima with the Recipe. Pratima initially was incapable of performing the Qigong, so it took the love of a daughter to move her mother through the motions.

Where Pratima’s journey to recovery began: Pratima had been diagnosed with Parkinson’s Disease and was prescribed Syndopa (Sinemet) Plus 4 times per day, Pacitane twice a day and Syndopa CR at night, plus an anti-depressant that she did not take. By June of 2011, she was in an advanced stage of Parkinson’s, which is reflected in her medical records, and some of her symptoms were marked bradykinesia, difficulty turning in bed, could not get out of bed by herself, in a wheelchair, limited walking and only with a walker, extreme tremors and rigidity, and loss of speech.

Pratima showed strength and spirit beyond most people’s comprehension. She fought the disease, she fought the medication withdrawal, she fought her Adrenaline-driven fearful mind, and she fought her wavering faith in herself to see it through to the end when facing her personal demons. But she persevered and stayed on the path toward her recovery.

And then one day, I saw this comment on the blog:

The final breakthrough: “yes i am worth it.” There it was. The healing of the soul; knowing she was “worth it.” First you heal the soul and the mind and the body will follow. And so it was for Pratima. Two months later she finished the Parkinson’s journey, a journey of coming back from Stage 4 Advanced Parkinson’s to fully recovered, cured from Parkinson’s.

Bhavna asked me to thank all of you for the love and support you have shown over the years, and specifically, she asked me to remind all of you that you are worth it!

Here are a few pictures from Pratima’s journey. 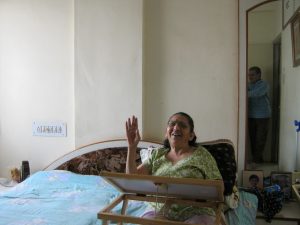 The love of a daughter helping her mother to stand: 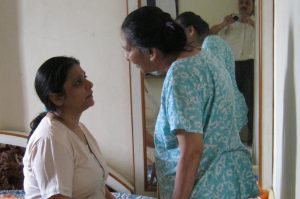 The love of her American son saying good bye for now to his Indian mom: 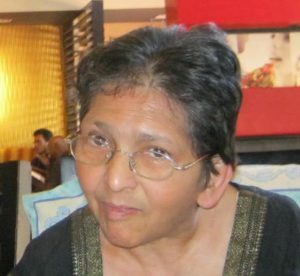 I am certain that Pratima would want all of you to know that just like her, YOU ARE WORTH IT!!!

35 Responses to Fighting Parkinson’s, and Pratima has passed away