Fighting Parkinson’s, and where it all began, part 40

Seven years ago, I began doing the Parkinson’s Recipe for Recovery®. Of course, back then it did not have a name…it was just what I was doing. At the same time, I began keeping a hand-written Parkinson’s Daily Journal. It is time to share my journal with all of you. Here is my November 6, 2009 journal entry, seven years ago today.

“11/06/09. Up at 4. Still slow, not surprised. Yesterday continued: Had my appointment with Dr. Sanchez-Ramos. Kate, who turns out to be his wife, writes for their newsletter, and she was in there and took notes.

Yes, I received my official diagnosis of Parkinson’s Disease…no big surprise there. Also, the appointment went better than expected. I explained to Dr. Sanchez-Ramos what I had been doing and he did not put pressure on me to take medications.

After the appointment, I talked to Dad, Mother, Allison, and Mark. Of course, Sally and the children, but that’s a given. I explained to them [my father, Sally’s mother, my sister, and my brother] that I am an open book, will answer all questions, and we all can take it from there.

Also, now that I officially have a diagnosis from a Parkinson’s specialist, when I beat this and become symptom free, maybe the information will be able to help others. What a useful purpose I will have served.”

At my neurologist visit, Dr. Sanchez-Ramos put me through 30-45 minutes of physical tests. Three in particular stick out in my mind: 1. a repetitive motion test where repetitive motion of one hand tapping on my thigh cause my other shoulder to become stiff and then my other arm to fly around uncontrollably; 2. a “follow the pen with your eyes” test where he told me he could detect cogwheel rigidity in my eyes; and 3. after the walk and turn test in the hallway, he told me to wait there for a moment as he needed to get something — he then went behind me and grabbed my shoulder and shook it and let go — I fell backwards and he and the assistant had to catch me.

In the end, he wrote me two prescriptions, Azilect and Amantadine. I never filled them. In fact, here they are for you to see (if you click the picture, it will enlarge): 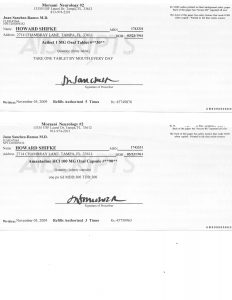 He told me that everybody who had Parkinson’s needed to be on medications. I told him that I was not going to be taking these medications as previously explained in our meeting. As a result, he scheduled me to come back in three months instead of six months. As I was leaving, he called my name as I reached the door and I turned around. He came over to me, looked me straight in the eyes and said that I would fall because my balance was so poor, so he highly recommended I at least fill the Amantadine prescription because “when you fall, you will want to have that at home ready to take.”

Fortunately for me that day on this one point, I was still in my stubborn, adrenaline-driven, perfectionist mode, and oh yes, did I mention angry…I thought, “I refuse to fall”…and, after that day, I NEVER fell.

And you do not have to fall, either. You do not have to do anything that anybody tells you will happen with your Parkinson’s. Each one of you is a beautiful, loving, compassionate soul. You are not a bunch of Parkinson’s symptoms that somebody else can control your life by saying “oh, now that you have Parkinson’s, all of these terrible things will occur.”

Please note: I will be posting one post per day through the middle of November. If you subscribe to receive email notifications when I post new blog posts and you would prefer to not receive those daily email notifications, simply send me an email at howard@fightingparkinsonsdrugfree.com, and let me know that you do not wish to receive a daily email with a link to each post. I will remove you from the list through the middle of November and add you back on the list after the middle of November. However, I still would recommend you checking the blog on a regular basis as it will contain very useful information for understanding my journey and helping with your journey.

11 Responses to Fighting Parkinson’s, and where it all began, part 40